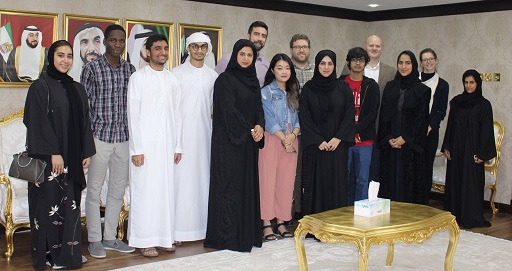 A delegation of students from New York University visited the headquarters of the International Institute for Tolerance in Dubai, where they were hosted by Fatima Al Tamimi, Head of Marketing and Media, Fatima Al Hammadi and several staff members of the International Institute for Tolerance.
Fatima Al Tamimi welcomed the delegation and gave them a tour of the Institute. The students were also introduced to the Institute's various programs.
Tamimi stressed the role of youth in achieving human rapprochement and building bridges of tolerance and harmony as a hope for the promising future.
She called on the students to follow the noble approach set by the late Sheikh Zayed bin Sultan Al Nahyan, the founder of the state, based on the values ​​of love, tolerance and altruism.
She also praised the efforts made by the Institute and stressed on the importance of supporting the efforts towards love and tolerance.